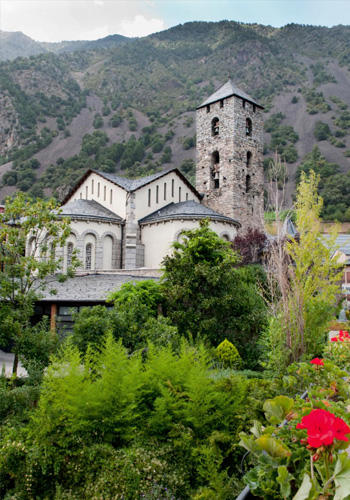 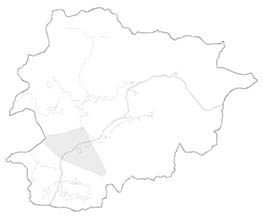 Located in a sweeping valley that stands at an average altitude of 1,013 metres, both the natural landscape and the city of Andorra la Vella make this one of the most beautiful capital cities in Europe. Here, two rivers (the Valira del Norte and the Valira del Oriente) come together to form the River Valira, giving this small city an added special appeal.

Climate | The climate is Mediterranean, yet with the noted influence of the high mountains. This can lead to extreme conditions during the winter, with cold and snow, making it common to see sub-zero temperatures. Living in Andorra la Vella during the summer is truly wonderful, as the temperatures are mild and seldom exceed 30 degrees Celsius.

Language | The official language of the country is Catalan, although Spanish, French, English and Portuguese are commonly used throughout the entire territory of Andorra; and to a lesser degree Russian, German and other languages are also spoken here.

Financial centre | Andorra la Vella is the financial heart of the country. Andorra’s five bank groups are all headquartered in this parish and attend to the public with extensive business hours, Monday through Friday.

Transportation connections| Andorra la Vella is well connected with both the national and international road systems and also has two heliports. Moreover, located just 40 km away is the Seu d’Urgell Airport (Spain), which receives flights with destination Andorra. Finally, three hours away are the international airports of Lleida and Barcelona, in Spain, and Toulouse, in France.

Educational Centres | The Parish of Andorra la Vella has three schools which correspond to the three coexisting educational systems: the Andorran system, the French system and the Spanish system. There are also three government-funded private schools (under the Spanish educational model: the M. Janer, the Sagrada Familia and the Sant Ermengol), one Spanish secondary school (covering both the required secondary education and the university preparation, known as “E.S.O” and “Bachillerato”, respectively), one professional training centre and two conventional, presence-based universities (as well as two online universities). Year after year, the educational services available in Andorra grow and expand.

Shopping | Those who choose to live in Andorra la Vella will find a wide variety of shopping districts, avenues full of stores and major shopping centres. These include the shops of the world’s top luxury designers, technology stores with all the latest innovations, supermarkets with international brands, and exclusive art galleries, always at very competitive prices, as the applicable Value Added Tax (known as the IGI in Andorra) is only 4.5%.

Recreation, entertainment | Culture, shopping, restaurants, mountain hikes, incredible parks, indoor and outdoor sports! When you live in Andorra la Vella, you are sure to enjoy a wide range of activities with the great advantage that they vary with the seasons.

If you are thinking about moving to Andorra la Vella, check with Andorra Sotheby’s International Realty. We are a local real estate agency with a deep knowledge of Andorra la Vella and we are sure that we can guide and assist you with everything you need to live in Andorra.